The Colosseum, the Amphitheatrum Flavium, is the most visited museum in Italy. Here you will find all information about tickets and guided tours for the Colosseum.

For visiting the Colosseum, you must arrive on time at the reserved entry time. Your body temperature is measured during the security check. It must be below 37.5° C / 99,5° F. In addition, you must not take any dangerous objects, alcohol, glass containers, aerosol cans or luggage into the Colosseum. There is no luggage storage at the Colosseum.

The Colosseum and the Archaeological Park of the Roman Forum and the Palatine Hill open currently at 10:30 a.m.

The closure is based on the sunset and is

There are currently two tickets for the Colosseum:

Full Experience Ticket, valid for 2 days for a visit to the Palatine and Roman Forum and for a visit to the Colosseum at the reserved entry time. Visit of the 1st and 2nd levels of the Colosseum including the exhibitions on the 2nd level. From 12 p.m. visit of the 2nd floor of the Palatine Museum, the House of Augustus (from outside) as well as the Church of Santa Maria Antiqua and the Rampa domizianea (in groups of maximum 20 people). Tickets

Visiting the basement of the Colosseum and the upper floors is currently not possible.

A tour of the Colosseum is highly recommended. You will learn a lot about life in ancient Rome and about what was going on in the Colosseum. Tickets

How much time you need for the Colosseum

How to get to the Colosseum

At the Colosseum is the stop of Metro Line B “Colosseo”. Line B crosses three important train stations:

Tram line 3 also passes the Colosseum. The tram is slow, but the route is picturesque. Coming from Trastevere, it leads past the pyramid and the Colosseum and continues to the Basilica of St. John, Santa Croce in Gerusalemme and San Lorenzo and to the zoo.

From Piazza Navona you can take buses 81 and 87 to the Colosseum, from Via del Corso take buses 51 or 85.

Of course, the Colosseum is also very easy to reach on foot. From Piazza Venezia you take Via dei Fori Imperiali, from Circus Maximus Via di San Gregorio.

How the Colosseum worked

The Colosseum is the largest amphitheater in the world. It is a UNESCO World Heritage Site and one of the seven new world wonders.

The Colosseum could hold between 60,000 and 80,000 spectators. Thanks to the efficient organization of the entrances, the auditorium could be filled and emptied faster than in some modern stadiums.

It was originally possible to flood the arena and naval battles were organized. Later, a more complex stage technology with lifts was installed. Wild animals and people could appear out of nowhere anywhere in the arena and stage sets could be set up in a few minutes.

Rome showed all its might and glory in the Colosseum. Animals from all over the world were shown and hunted in the Colosseum, there were executions and gladiator fights. The animal hunts took place in the mornings, at noon convicts fought against wild animals and in the afternoon the gladiatorial fights took place.

Read more about archaeological research in the Colosseum

History of the Colosseum

After the death of Emperor Nero in 68, his magnificent villa, the Domus Aurea, was filled up. In the area of ​​the Colosseum there was an artificial lake that belonged to the villa. The Flavian dynasty, the new rulers of Rome, built the mighty Colosseum. It is therefore called Amphitheatrum Flavium. Construction began in 72 under Emperor Vespasian. He died in 79 and never saw completion. The inauguration took place in 80 under Titus. The inauguration celebrations lasted 100 days. The construction was financed with the treasures looted in the temple of Jerusalem. 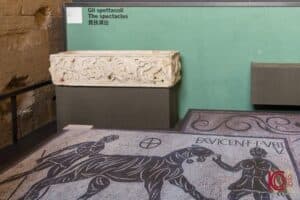 Under Domitian, who ruled from 81, the basement was expanded with supply rooms, elevators and stage technology.

Major restoration work was necessary in 217, probably after a lightning strike. They lasted 5 years. In 250 more works were necessary after a fire caused by lightning.

After the Visigoths sacked Rome in 410, gladiator games were banned and only hunts were held. Restoration work occurred after the earthquakes in 470, 484 and 508.

In the 6th century, the Colosseum served as a burial site and later as a castle. There was major damage from an earthquake in 847 and in 1349 the southern outer wall collapsed after an earthquake. The material was used to build palaces in today’s city center. Apartments and stables were built in the Colosseum.

Another earthquake occurred in 1806 and major urgent work was required. Raffaele Stern hastily erected retaining walls. On the side facing the forums, Giuseppe Valadier carried out support measures in 1823.

Further works and excavations took place in the 20th century and renovation work is also currently being carried out. The upper floors are therefore currently not accessible.